Are you having problems with bats in your home or attic? Our Marion Indiana Bat Removal Crew Are Here To Help! Read through our helpful information on this page to learn more about our Indiana bat removal services. Feel free to give us a call anytime. We’d be happy to schedule your inspection with one of our trained bat control technicians. With a customer-first mentality, our team here at VG looks forward to doing business with you, whether you are a homeowner or a commercial business manager looking for solutions to bat infestation.

Bat problems occur when exposed gaps exist in a home or building. A bat can gain entry through any crevice wider than 3 pennies stacked, which is very, very small, so these areas need to all be located and thoroughly bat-proofed to keep the bats out for good. On larger buildings, you can imagine there are a lot of places that need to be sealed. Even on a smaller home, the bat removal process can take hours. Furthermore, it can be dangerous for an untrained person or incompetent operator working from these heights. 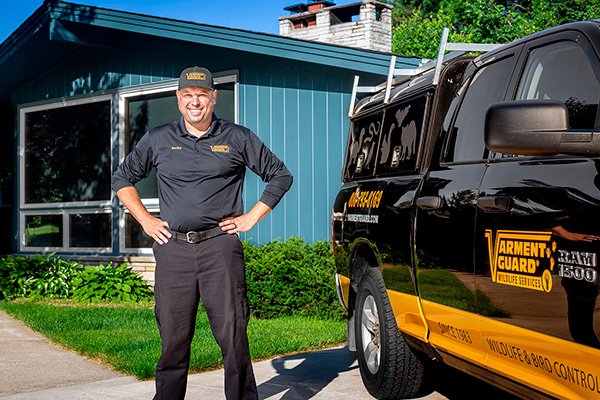 Varment Guard Wildlife Services and their Marion Indiana Bat Removal team are the go-to company when you have a bat infestation.

You can rest assured that Varment Guard’s Marion Indiana Bat Removal specialists are among the leading professional businesses in the wildlife control industry. When it comes to bats, working from heights is part of the job description. The rigorously trained VG technicians handle all sizes of Marion bat removal jobs, and we’ll continue getting them done without a scratch, time and time again. Even if an accident were to occur, Varment Guard is fully insured to protect our customers from any liability on the job.

Now, let’s get into how we manage bat problems and perform our Marion bat removal services. To remove bats from a building, we utilize a device known as a “one-way excluder” or “bat valve.” To physically get rid of the bats, we install these devices over the primary entry points to ensure the bats can make their way out but not back in. Furthermore, detailed sealing work is required around the entire building to ensure the bats cannot find another way inside. This sealing process is known as “bat-proofing.”

On an average-sized home, several dozen areas may need sealing and repair. Homebuilders often do not consider bats or other pests during a build, and so many areas can be left vulnerable to a bat problem, even on a brand new house.

Our fully equipped Marion Indiana Bat Removal team offers attic restoration in conjunction with the bat removal service. Our attic decontamination team will remove all the insulation and bat droppings from the structure, sanitize with disinfectant, and blow in new insulation. Upon completion, we restore attics and crawl spaces to brand new conditions. On top of that, as a result of our superior Marion insulation service, you will also save money on heating and cooling costs.

Bat proofing is a highly detailed service that involves accessing nearly all the angles around your roofline. Bats typically do not enter homes from areas lower than 8ft, and so the main areas of concern are always around the roofline. Soffits, dormers, gable ends, roof vents, and many other locations may be examined by our Marion Indiana Bat Removal experts depending on what is present in your home’s construction.

Depending on the situation, we may apply both caulking and screening to the open gaps where bats can gain entry. The particular materials Marion Indiana Bat Removal use last the test of time, and so all bat proofing services come with a guaranteed warranty, so you are covered if the bats come back. We take pride in a job well done, so you can rest assured your bat problems will be solved permanently, the first time. 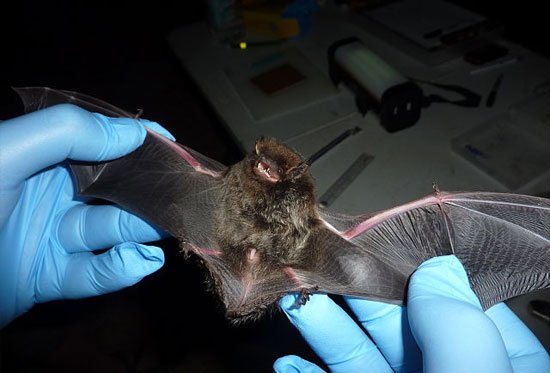 Did you know that bats are the leading cause of rabies deaths in the United States? Get bats out of your home now by contacting our Marion Indiana Bat Removal team of experts. 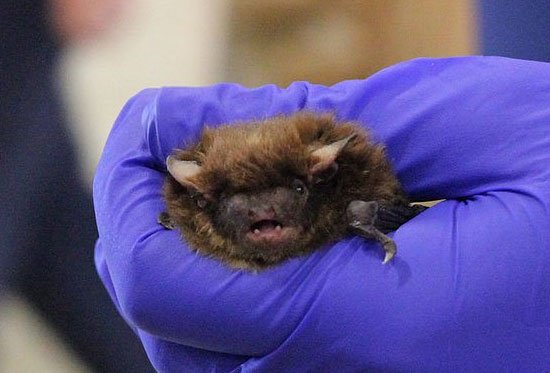 Varment Guard Wildlife Service and their Marion Indiana Bat Removal team efficiently and humanely exclude bats out of your home or commercial buildings.

Bats are amazing animals, but when they get into buildings, they can cause severe damage with their waste and urine, contaminating structures to sometimes unlivable conditions. That, however, is the extent of damage bats will cause generally. See, bats do NOT chew on wires or other materials in your attic, as rodents do.

Another common issue concerning bat infestation is bats showing up inside living quarters, often during late-night hours. These occurrences can cause a great deal of stress as the winged critters take flight, circling around at great speeds, swooping by our heads, and finally landing somewhere before taking off again. When a bat problem is left unaddressed, these occurrences will often repeat, time and time again, until the bat colony is finally evicted from the house. 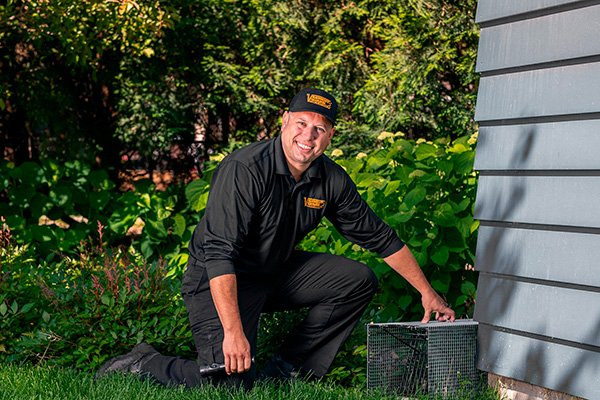 At Varment Guard Wildlife Service our Marion Indiana Bat Removal team are also experts in all other forms of wildlife control.

Lastly, all bat species are federally protected, which means we can’t kill the bats or handle them inhumanely, causing injury. To sum up the process, our goal is to let the bats find their way outside alive and unharmed through one-way devices. And then, we prevent them from reentering any other spot by performing the bat-proofing process.

If you ever call a company about your bat problem and their plan involves killing, trapping, or harming the bats, steer clear since that company is highly unethical and breaks the law. The only exception when euthanizing a bat is acceptable is when it has potentially come into contact with people, or perhaps a house pet, and the situation deems it necessary to have that bat tested for rabies. Other than that, bat removal is always done via live-exclusion.