Bats can be quite the nuisance around these Metro Melbourne regions. Bats will invade residential and commercial structures around Melbourne causing thousands of dollars worth of damages and eviction costs. Bat droppings building in the attic can damage drywall material and can even soak into wooded beams in the attic or walls. It’s not uncommon for the smell of guano to permeate into living quarters, especially on hot summer days.

Fortunately for you, Florida Wildlife Trappers knows these types of bat problems all too well, and the concerns you have can be relieved quickly when you hire our company for Melbourne bat removal services.

About The Cost Of Bat Removal In Melbourne

This is the most commonly asked question by people calling about a bat problem – “how much will removal cost?” Well, first you must understand there is no “exact cost” AKA set rates when it comes to bat removal.

The pricing info we give here is sensitive information and we advise calling us about your specific issue before you assume it’s going to be too expensive or whatever the case may be. Bat problems are often found in the attic, and no matter how many bats there are, performing the live exclusion process remains the same. Read more on exclusion regulations and info below. But given an average sized 2 story home that has relatively newer construction with a shingled roof and medium sized bat colony in the attic – the AVERAGE cost is likely going to be somewhere in the range of $900-$2200 depending largely on the number of gaps we need to access and seal around the roofline.

Not all bats infest structures, and even the ones that do are somewhat particular about the types of buildings they are seeking to inhabit. Most all bats that choose to live in man-made structures were actually born in one. Wildlife biologists call these “imprinting bats” when they replicate instinctive behavior learned from the parent bat colony. Bats seeking to invade a new home/structure will generally be more inclined to enter a building that has similar construction as the building they were born in. 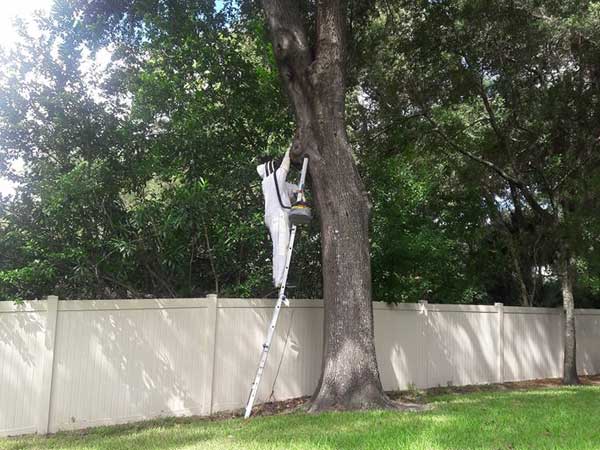 We do more than remove bats. We are bee experts!

There is also evidence suggesting these bats will gain access to a home through a highly similar entry point as the original parent colony had been using. Young female bat pups that are maturing into adults will live with their parent colony for several years if not forever, and so this behavior is continually passed down as the generations of female bat colonies (AKA maternity colonies) continue to thrive.

So now you should see, it’s not just the luck of the draw when bats choose your home to infest, but it is highly unfortunate and a bummer as we understand the costs of removal are unexpected expenditures as nobody can predict having a bat infestation… Bat problems are highly common, but we know that probably doesn’t make you feel any better! But, what might is knowing that Florida Wildlife Trappers carries all the proper licensing and insurance for this line of work. We are not some freelance operation running around without a trade name and insurance, as many independent operators tend to do in this field of work. You can rest assured that you’re in good hands with FWT.

We understand that you want this bat problem of yours to disappear, like yesterday. But first we need to perform a full 5 point wildlife inspection before we give an actual price for bat exclusion or bat removal, unless there is a single bat in the house, in which case we’d give a quote on coming out to remove as an emergency service. The bat inspection will entail detailed analysis of the roofline to determine where & how the bats are getting inside. 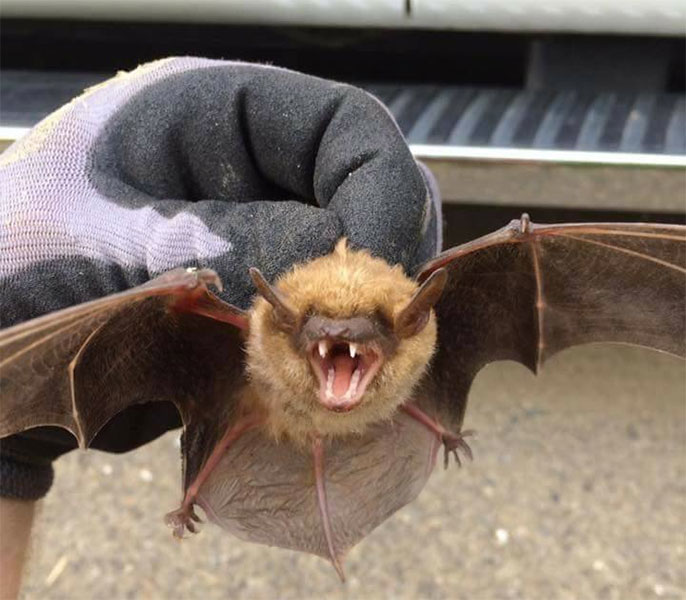 This bat was captured in a clients attic. Many more as well.

During the inspection we will thoroughly check the attic space for damage, unless it’s too hot – in which case we will reschedule for the attic inspection. These Florida attics can be like a literal oven! Summers are always the worst. But most times the hot weather won’t stop us from doing our job, as we’ve grown accustomed to it. During the attic inspection we will be looking for damages like Droppings etc. Unlike how most people tend to assume, looking in the attic actually has little to do with how we get rid of the bats. It’s just to check for damage… All the eviction process with be quoted based on viewing portions outside of the attic.

Florida Wildlife Trappers carries the appropriate equipment to provide attic cleanup and bat guano remediation if necessary. Depending on the situation with levels of contaminated material in the attic, the job may require 1 of 2 things: a simple spot-cleaning service or a full-blow attic cleanup and complete restoration. We can do both. Often times with larger bat colonies there will be more droppings accumulated and the odors will slowly begin to penetrate the home over extended periods of time, which the odors will be much more pronounced on hot and muggy summer days due to the bat guano bacteria mixing with the moisture which leaks into the house from the attic and walls. 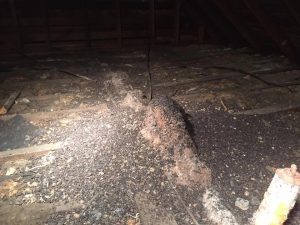 This is the guano left by bats in an attic. of a client. No problem for us!

By federal law bats cannot be killed. Humane methods of bat removal are the only legal means of remediating bat issues. Florida Wildlife Trappers has perfected this process which has proven to get the bats out faster, and the solution will last long-term as well. What we do is seal the entire building except for the primary entry points. We then put up one-way funnels or “bat cones” over these entry points which the bats will then pass through at dusk when they go out on their nightly feeding routine. Upon returning to the original entry point(s), the bats will be unable to gain access after they have been excluded. This is a specialized process known by people in this industry as “Live Bat Exclusion.” After the bats are gone, that is when we can process with bat guano cleanup and attic restoration.