Rafinesque’s big-eared bats are a mid-sized bat species that tend to roost in hollow trees to protect from predators and maintain a comfortable temperature. They exist mainly in the southeastern regions of the United States. These bats have fur that is grayish and brown on the top with whiter patches underneath. They have a protruding nose and can curl their ears backward over their shoulder, distinguishing them from many other bat species. They weigh anywhere between 7 and 13 grams, with the female bats typically being larger than their male counterparts. Rafinesque’s big-eared bats are about 4 inches in length with a wingspan that can reach eleven inches total. 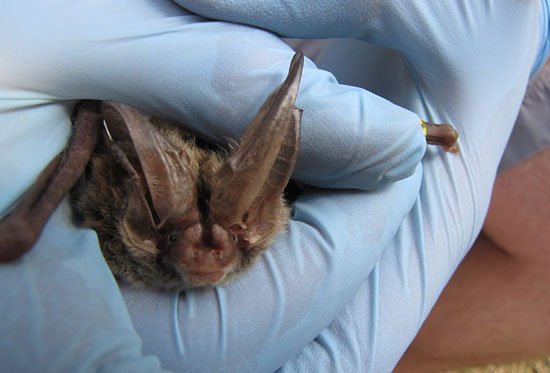 The population of Rafinesque’s big-eared bats have declined in recent times due to habitat loss and is known as a threatened species in many southeastern states. The bats choose to hibernate in caves and other similar locations that aren’t too distant from their summer residences. They are slow flyers compared to many other bat species but display great agility for catching their prey. Rafinesque’s big-eared bats feed mostly on nocturnal insects with a propensity to go after moths. With the draining of many swamplands, these bats have recently moved into more human-dense areas. They are known to take residence in old attics, making them a more common nuisance bat than before.