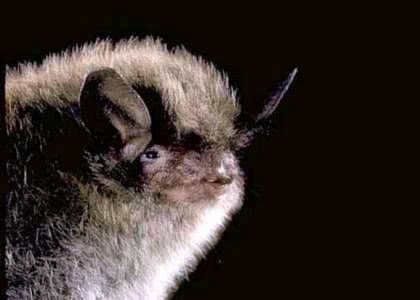 The little brown bat is a species that is native to many areas of North America. It can be found in Alaska, stretching all the way across Canada, and also spanning the northern United States. They are a mid-sized bat which has a wingspan of up to 11 inches while weighing in atunder half an ounce. Their fur is typically brown but can be reddish or, in some cases, a golden color. They live in colonies where the number of individuals ranges at over one hundred thousand. Little brown bats choose caves, trees, and abandoned buildings as roosting locations. During the colder months, these bats are capable of migrating hundreds of miles to find locations to hibernate in.

The mating season begins in August, with offspring being born two months afterward. Little brown bats, like many other bat species, feed on insects. During a feeding session, little brown bats eat about half their body weight to provide them with the energy they require. This makes them an essential component of our ecosystem where insect populations must be held in check. Because of this, it is incredibly important that these bats are allowed to survive and reproducing without altering their lifestyles. Unfortunately, their population has taken a massive hit due to the disease called white-nose syndrome.

To preserve the little brown bat population, it is important that they be removed without harming them. Bat Removal Pro pre-screens all bat removal services in your area to make your decision on who to hire as easy as possible. Visit our directory and find the most qualified bat removal services near you!