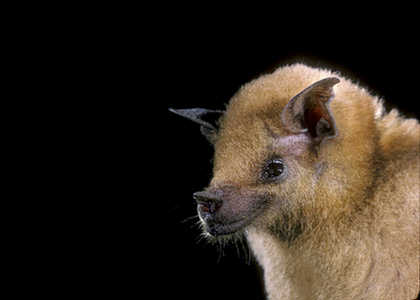 Lesser long-nosed bats are a small bat species that is located in some areas of the southwestern United States. They are light, weighing anywhere from one to 20 grams. Their fur is yellowish brown with rusted brown on the belly. They can be distinguished by short tails, small ears, and a triangle-shaped leaf at the end of their noses. They weigh anywhere from 12 to 20 grams with a 14 inch wingspan. Lesse long-nosed bats generally live to be about 20 years old. The bats feed on nectar from specific types of cactuses.

Lesser long-nosed bats’ mating seasons fall within November and December, while the offspring are birthed in May and June. The females have one pup at a time. After about one month, the young bats are capable of taking flight. The lesser long-nosed bat is listed as an endangered species in the United States. Because of habitat loss, their population is threatened which, in turn, threatens the cactuses they pollenate.

Being that the lesser long-nosed bat has endangered species status, they must be handled with extreme care. When removing the bats, a professional bat removal service must abide by federal law by not harming the bats in any way. Bat Removal Pro goes to great lengths to determine which are the most qualified bat removal services in your area. Take a look at our directory now and safely remove bats from your home!