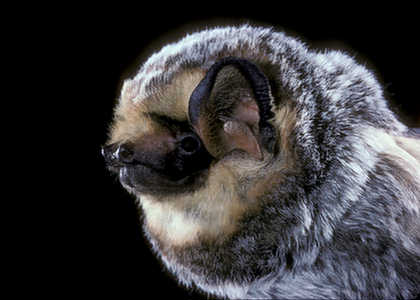 Hoary bats are a large bat species which are thought to reside in each of the 50 United States and many parts of Canada. Their fur is long and thick with a grayish-brown color and white tips. The bats weigh up to 35 grams and have a wingspan of just under 17 inches.Hoary bats tend to avoid areas where humans are located, prefering to stay hidden in foliage until dark when they come out to feed. Hoary bats consume beetles, mosquitoes, and other small insects. Their living space of choice is in forested areas during the summer and caves or mines in the winter. The bats can live for up to 12 years in the wild.

Hoary bats are the most widespread bat species in North America. In the winter months, hoary bats can typically be found in the southern states and further down into Mexico. The males are usually found separate from females when the weather is warm except during mating season. The females typically have two offspring at a time, each of which is blind for about 12 days. After a month, the young bats are normally capable of flight. Although these bats are highly important to the ecosystem, they are a nuisance to humans. It was found that about one quarter of captured hoary bats had rabies, which is a sometimes fatal disease in human beings.

If you notice hoary bats in your home or attic, you could be at serious risk to contract any number of diseases. Bat Removal Pro exists to narrow your search to the most qualified bat removal candidates. Visit our directory to find the best professional bat removal services in your area today!