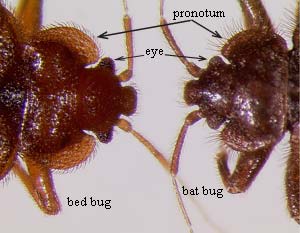 The bed bug, bat bug and related species of the family Cimicidae, are blood-sucking insects that feed on birds and/or mammals.

Prior to the recent increase of bed bugs, the bat bug was the most common representative of this group of insects found within homes in Colorado. Bat bugs develop in colonies of roosting bats, which sometimes occur in attics or behind walls of buildings. Bat bugs may move into human living areas and incidentally bite people, with such migrations particularly common when bats migrate or are eliminated from the building. However, in the absence of the bat hosts, these insects cannot sustain and reproduce.

Distinguishing the bat bug vs bed bug demands some extra tools. The difference between bed bugs and bat bugs is difficult too observe without magnification and comes down to whether the hair is shorter or longer than the width of their tiny eyes.

Bat bugs choose to fly with the bats instead of hitching a ride with humans; their preferred host is the bat and it’s believed that bed bugs descended from bat bugs.

It is thought that cavemen and women and bats lived in close proximity to each other and it’s when bats abandoned the cave that the bugs made the jump to humans.

The bed bug is a notorious species and is the only member of this insect family in Colorado that is adapted to living entirely with humans. For several decades following World War II, it was largely eradicated from the United States, existing in only small pockets. However, within the past decade it has had tremendous resurgence. Bed bugs can be accidentally carried on furniture, luggage and other materials so problems with bed bugs tend to be most severe in apartments, motels and other sites that see high amounts of human traffic.

WE'RE MORE THAN JUST BAT REMOVAL PROFESSIONALS
IF YOU ARE A HOME OWNER OR BUSINESS
WE SERVCE YOUR PEST CONTROL, REMOVAL AND TRAPPING NEEDS AS WELL!

Bed bugs usually feed in the middle of the night while people sleep and the bite is painless. They often feed for less than 10 minutes before the insect is satiated and returns to a hiding area to digest the meal. A line of bites may appear where several bed bugs have fed along the edge of a sheet or clothing lying next to the skin.

Bat bugs occasionally bite humans and there can be a similar range in reaction that occurs with bed bugs. Fortunately, extensive testing has determined that bed bugs and bat bugs are incapable of transmitting human pathogens.

Although the bite is not immediately felt, people often react to the proteins of the bed bug saliva introduced during biting. Typically, a reddish swelling,(“wheal”)may develop, associated with some swelling and itching. There may be little response immediately following the bite with peak itchiness being noticed at about a week, then gradually declining. Repeated exposure to bed bug bites may produce more intensive reactions and itchiness. However, these reactions are highly variable and some people show little response while others react strongly. Regardless of the symptom that develops, there is nothing unique about bed bug bites that can be used for a positive diagnosis. The detected presence of bed bugs is needed to determine if a reddish “bite” might be from bed bugs.

Thanks to bedbugsupply.com for the bedbug bat bug image.